Suggested Brew Methods: everything but espresso

Finca Veracruz, located on the slopes of the Andes Mountains in the Antioquia region of Colombia, was established by Pedro Echavarria in the 1980s. It is one of five farms that combine to make up the Santa Barbara Estate, and has become known as the more experimental farm, exploring innovations in processing and variety.

In the last five years, Pedro’s son has become more deeply involved in the workings of the farm, taking the already high quality of the coffee to new heights through experimentation in processing and increased monitoring and control of every stage of production. Pedro Jr. and Santa Barbara’s Coffee Director, Leonardo Henao Triana, manage their wet mill with a blend of art, industrial rigor and scientific curiosity. The vivid flavor of our Colombia Finca Veracruz is largely the result of an unusual process of extended fermentation they developed, in which pulped beans are added to fermentation tanks along with the previous days’ pickings instead of keeping them separate. This longer fermentation process, through alterations in the pH levels of the tank, highlights the coffee’s sweetness while maintaining the more subtle aromatics this coffee has to offer.

Extremely well balanced in the cup, Finca Veracruz leads off with honey sweetness that forms a foundation for complex herbal and floral aromas. A counterpoint of tart fruit flavors, notably blackberry, predominates the latter stages of the cup. Finally the silky body leads to a long finish that sustains the preceding flavors as it adds a layer of milk chocolate. 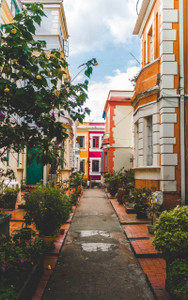