The story of specialty grade coffee in Burundi is one of triumph over adversity. A Massachusetts size country located at the intersection of the Great Rift Valley and East Africa proper Burundi has dealt with economic and societal instability dating back to the early 1890s when the area came under German colonization. Coffee production was introduced to the country in the post WWI era, after the colony had been ceded to Belgium. After independence was achieved in the 1960s coffee production was associated with Burundi’s colonial past, and quality deteriorated as the industry was at first privatized, then nationalized and then moved towards reprivatization . In the past decade a commitment to hard work and improvisation in the face of limited financial resources have led to a dramatic increase in cup quality overall, and specifically to the export of truly exceptional specialty grade coffees.

Coffee production in Burundi is largely organized around “washing stations”, facilities for collecting cherries and preparing beans for export. Our Burundi gets part of its name from the station where it was prepared, the Nemba station, one of more than twenty washing stations in the province of Kayanza. Founded in the early 90s, Nemba has won several awards for their coffee, including 1st place in 2015 Cup of Excellence competition and best of Burundi in 2016. Unusual for this region, our Burundi is dry processed – after careful sorting the fruit is allowed to dry on the bean, imparting flavors of sweet berries and red plum. Done carefully we find the process nicely suited to display the majestic character of the old Bourbon varietal.

In the cup Burundi Kayanza Nemba displays a complex interaction between sweet fruit and berry notes, a recessive lime tinged acidity and deep chocolate creme flavors in the finish. Medium bodied overall the silky mouthfeel has great presence without distracting from the lively fruit flavors. As you would imagine our roast shines in the pour over setting but surprisingly is also excellent as a nicely balanced single origin espresso.

In spite of significant challenges Burundi has come a long way in recent years, building on a foundation of old Bourbon plantings and raw determination. It tops many coffee aficionados’ list of underappreciated origins. We’re confident you’ll see why we’re so pleased to share this hidden treasure, and to support quality coffee and quality of life in Burundi. 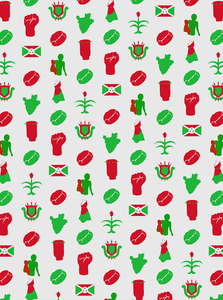